How do we survive a plague? Together 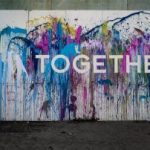 For those of us who found ourselves at the heart of the AIDS crisis in the 1980s, COVID-19 incites old emotions which have never been far from the surface in the intervening decades.

In myriad ways, the world of 2020 is one we couldn’t have imagined back then — not least the digital connectivity we have so quickly taken for granted.

In the early 1990s, I bought my first mobile phone, a small brick-sized Nokia, to keep in touch with my late partner whose health was failing. I still have the same number.

This virus is completely different too— and, it seems, more knowable. Perhaps that’s just the science. But it’s hard not to conclude it’s the threat as well. This is a shared dystopia. Back then we were on our own.

Yet all this week — semi self-isolated with a persistent dry cough, I have been unable to shake off the sense that there is something we can — and must — learn from those times.

And so this morning I found myself rereading David France’s essay, After Surviving: A Great Gift, written for the Edinburgh International Book Festival in 2018.

The essay serves as an epilogue to France’s How to Survive a Plague, an extraordinary account of the activism that helped to bring about a treatment for AIDS.

That treatment was a wonderful gift in itself — even if, tragically, it didn’t save many of the very people who made it happen.

But as France points out the greater gift was the social integration of the LGBTQ community which it spawned.

The key to all this — and the clue to how we survive a plague now — was community activism. However governments act, and they must, our way through this lies with all of us — in civil society.

Whatever the necessity of ‘social distancing’ our need for social connection has been brought into the sharpest relief imaginable. We will get through this together.

Civil society’s response is not one thing or one size fits all. And some of it is necessarily close to the state because of the role third sector organisations play in delivering services to those who are most vulnerable — and at most risk from this particular virus.

I’ve had numerous conversations this week with colleagues across the sector who are skillfully navigating their way through this crisis.

Crisis isn’t to dramatise. It’s to emphasise. This is an unprecedented public health emergency.

Some of those conversations have been with those at the helm of the third sector who are working with government to ensure an integrated and coherent response.

This speaks to the ‘inside/outside strategy’ in France’s essay — protest outside to demand a seat at the table inside. It’s what we had to do back then. Fortunately, in this crisis, civil society is already on the inside.

But as those representing citizens who all too often find themselves at the margins — older people, disabled people, people with chronic conditions, carers, homeless people and those living in poverty — are reminding us right now, we can’t afford to be complacent.

Advocacy isn’t just for individuals — it’s our collective voice too. Along with action, it’s at the heart of civil society’s raison d’être.

Responding to this crisis is a constantly evolving game of catch up which touches every part of our lives, and so the response it demands from state and third sector alike leaves no hiding places.

Occasional glances at my Twitter feed today have reminded me that there is no part of civil society which doesn’t have a responsibility.

Delivery organisations, membership bodies, funders — each has a role to play in shaping our response, shoring up capacity on the ground to marshal and nurture solidarity in the community. Doing what we do best.

And it’s in communities — most local, furthest from power — that civil society can be at its most potent. As Julia Unwin reminds us in the Civil Society Futures Inquiry’s final report, we are all civil society.

That’s why calls to action like these from the writers Jemma Neville and Will Sutcliffe on Twitter matter so much — right now.

‘Some street-wise things we can do to support one another: — send surprise post — offer to collect prescriptions, groceries, walk dogs — set up a digital book club, fitness routine — phone for a chat- read aloud from a book or paper, ask for a recipe, ask for favourite memory.’

‘We have joined a WhatsApp group for our street, to keep an eye on elderly and vulnerable people, and shop for them if necessary. Before the situation worsens, now might be a good time to set one of these up in your area.’

It is with these calls in mind that civil society leaders must act. Yes, I know there are a thousand things to do to keep services on the road. But how can we do that in a way which galvanises a sustained response beyond service land?

In Scotland, our narrative about empowering communities is strong. But there is so much more we can do to realise the potential of social action to drive change in communities which can help solve the wicked problems of our times.

COVID-19 was the moment none of us wanted but it’s given us a testbed like no other before.

Matthew Taylor, Chief Executive of the RSA, said this week:

‘The UK economic policy response to COVID-19 is not perfect nor the last word but it is significant and coordinated. In 2008 the UK leadership and US response helped the world manage a profound systemic crisis. The lack of US/global leadership capacity this time could prove catastrophic.’

I won’t be alone in fearing he’s right. And while it’s undoubtedly not a moment for scoring political points, the man in the White House, as so often, proves the exception to every rule.

It is all to easy to despair in the face of such wilful self-interest and ineptitude. But staring into the void gets us nowhere.

We can’t always change what governments do, let alone the course of science — though AIDS activists proved astonishingly adept at both. And in Scotland at least, government’s doors are open.
But social action is in our gift.

In After Surviving, France quotes the writer, Andrew Sullivan:

‘If gay life and culture flourish for a thousand years, people will still say, “This was their finest hour.”’

If ever there was a moment for civil society’s finest hour, it is now.

Photo by Adi Goldstein on Unsplash

NEXT
How do we survive a plague? Only connect!