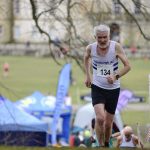 It was a slightly indifferent way to end the season. My legs felt heavy after nine races in five months. And after a cautious start — at north of 10k, the course demanded it — I didn’t quite work my way through the field the way I’d hoped. By the final lap of three, energy depleted, and progress halted, I can’t deny it — my heart deserted me a tad.

The conditions at Callendar Park for the national cross-country championships were the best I can remember — good to firm. For those of us who revel in the effort that comes with the worst that winter can bring, the lack of rain, sleet, or snow, was almost disappointing.

That’s been the story of the season too. Climate change makes itself felt in myriad ways. Mind you, as my shoes bear testament today, there was mud — in places, plenty of it. The wrong sort of mud too — cloying, treacly stuff. I’d have preferred it boggier. There’s just no pleasing us runners sometimes.

But here’s the thing, it was my first season for four years. And it was a season which many times I thought was never going to happen. Shortly after the 2017/18 season, major injury stopped me in my tracks.

Regular readers might recall the story — told in anguish in the summer of 2018. After weeks of hobbling about, I’d finally learnt that the cause of my ailment was not, as feared a torn this or that, but something much more serious. Almost catastrophic — in my wee world anyway.

Grade 4 osteoarthritis — near-total loss of the articular cartilage in my left knee. I’d been in good form — the best for years — and hadn’t seen it coming. Almost unnoticed, the condition — aided and abetted by decades of impact — had eaten away the connective tissue that makes running possible. In the end, it was just bone on bone.

What happened next was not pretty. Running had caught up with me. And despite my declaration that I couldn’t stop yet, there were more than a few moments when that felt inevitable, even preferable. What follows will be prosaic for all but the most seasoned runners. But a whistle-stop tour goes something like this.

Determined to get back racing as soon as possible, I opted to go private. Uninsured that meant shelling out more than eight grand. At least it would be quick and reliable. But a last-minute cancellation due to the most mundane administrative cockup put paid to that hypothesis.

Scunnered, I opted to revert to the NHS which meant another eight months (goodness knows what it would mean now). I know we all love the NHS — more than ever — but getting to the operating table was frustratingly bureaucratic at times. Not unlike the mud I ran through yesterday.

As anyone who has been on the journey from primary care to elective surgery will tell you, you need a bit of tenacity and no shortage of patience. I will say — and some may take issue — that one of the most irritating aspects of the whole thing was having my condition referred to as a ‘sports injury.’ Self-inflicted. If only I hadn’t bothered to keep body and soul together by running in the first place.

But onwards to invasive surgery — a high tibial osteotomy. For the gory details, look it up and prepare to wince. Precision butchery, performed, of course, by a highly-skilled consultant. Who, of course, just happened to be the same guy who had been going to do it for eight grand. Go figure.

So — 15 months on from the fateful morning when my body caved in, I was mended — sort of. Because the surgery involved an enforced break of the bone which had to re-establish itself, I was non-weight bearing for three months. And yes, I know it’s minor in the scheme of world suffering, but it bloody hurt.

And all the while I knew the reward would be that I’d have to learn to walk again before I could attempt to run. It would be a slog, beginning with mind-numbingly dull rehab exercises. Another first world problem for sure, but the tedium was crushing at times, the progress infinitesimally slow.

Still, as with any new experience, even the most unwelcome, you get to learn something about yourself and the world around you. In my case that proved to be the briefest of glimpses into a disabling world. For someone who had spent their adult life in the thick of equality policy, it was, as I wrote, enough to challenge any lingering complacency I might have had about access and inclusion.

Fast forward. Eventually, after months of work in the gym, I got running again during the first lockdown. An unexpected opening up of opportunity amidst a closed down world. My steps were faltering, cadence far from elegant, and progress scarcely linear. But the sheer joy of it all was utterly life-affirming — a curious contrast to the pandemic.

I’ve learnt anything in life, it’s take nothing for granted. And barely a month or two into anything resembling actual training, the other knee went. What was wrong, I had no way of knowing and seeing a physio was impossible in Covid land. So it was back on my bike, the one I’d bought with gritted teeth when injury first struck. Once a runner — I didn’t want to bloody cycle.

But I couldn’t run ten metres without pain, and I wasn’t going back to the monotony of swimming (I’m hopeless at it) so into the saddle I went. I almost learnt to love it for a while. But there’s a bit too much faffing about with cycling for my taste. And that’s just getting out of the door.

Fast forward again. Back to the gym and a glimmer of progress. But still no running. I assumed the worst — surgery to the right knee. Another lockdown slowed me down still further. Gyms closed again. Roads too icy for biking. Just walking and the weight goes on as muscles shrink. To cap it all, some days I get in from the walking and I’m limping. I’m done.

But finally, spring came, and I was in the gym. Much to my astonishment, everything started to feel more stable. And one evening last June, almost a year to the day since I’d last tried, I had a notion that I’d try to run. I headed out onto empty streets under the cover of dusk. I didn’t want anyone to see — not that they would know I’m an actual runner. Or was.

Ten meters — niggly but no pain. A hundred meters — still moving after a fashion. Half a mile — wow, I should stop. A mile — right I’m done. Back in the house, I text two running pals who know the journey inside out (poor souls) — I think I’ve just run a mile I say, not quite believing it myself.

And that’s how the unmissable joy of it all started again. At first, I assumed every run was a miracle and might be my last. But gradually confidence returned, training resumed and the prospect of an actual race loomed. As luck would have it, when it finally came — three and a half years since I’d last raced, it was the dreichest of days and the hilliest fixture of the season in the Scottish Borders.

Me — I didn’t care a jot. I was elated to be there at all. Club tent dripping inside and out. Muddy kit strewn across the greasy groundsheet. Eagerly comparing notes about the course with incoming runners (it was a relay). I wasn’t the only one feeling the thrill. Covid had put paid to the previous season for everyone.

Final fast forward to the aftermath of yesterday’s race. Every one of the season done and a return to more respectable form than I could have dreamt of a year ago. But here’s the rub. On the darkest of days when I thought running and I were done for, I’d say, if only I could have just one more cross-country season, I’d be happy. Because that’s how the love affair started half a century ago, when I was a shy, lanky schoolboy, in the Michaelmas term of 1972.

Now I’ve had that season, of course, I want another. And probably another. There’s just no pleasing us runners sometimes. To my delight, I caught up with running and I won’t stop yet.

PREVIOUSNEXT
‘It’s A Sin’ was so much more than a TV show — a year on, I carry it in my heartAll we have ever wanted is to live our best lives — Jake Daniels’ courage means many more might do just that