One Moment in Time: the other 9/11 and how I fell in love with Berlin 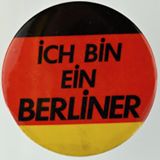 On the evening of 9th November 1989, I was at a trade union lesbian and gay conference at the Swallow Hotel in Peterborough. It was long before gay marriage was anywhere near the political agenda and the only other guests at the hotel were people attending a big straight wedding with all the trimmings.

The juxtaposition was odd for sure. But things were about to get a lot more exciting than that.

Retreating to my room after a day of conference shenanigans, I switched on the television. Just as well. The Berlin Wall was falling.

I watched in awe as what I still think of as the defining political moment of my lifetime unfolded on the screen in front of me.

I was 28 and having joined the Labour Party at university in 1979 I was enjoying what turned out to be a brief sojourn in the Communist Party.

That may seem odd now, but in the 1980s the British Communist Party was where some of the most creative political debate on the Left was happening. Marxism Today’s analysis of Thatcherism and how the left might respond to it was as powerful and progressive as anything around at the time.

That said, it certainly seemed odd to people in Berlin when I was there just a few weeks later.

By chance, I’d planned to visit in December earlier that year to coincide with a trip to Stuttgart for a conference.

And so just a few weeks after the fall of the Wall I travelled to Berlin on a sleeper train from Stuttgart. I remember vividly being rudely woken by East German border guards in the middle of the night, demanding to know where I was going.

It was exceptionally cold and had been for much of the previous month. In the early morning light as the train approached its destination, East Berliners were making their way to work in the snow. I mused that it was now too late to defect.

As I arrived at Zoo station in West Berlin a stranger whom I asked for directions said to me ‘It’s warm here now’.

It was the beginning of one of the most memorable trips of my life and a love affair which still endures. There were so many moments like that encounter which sound like clichés 23 years later.

But they really did happen, including hearing the Pet Shop Boys’ West End Girls on a tinny radio on a tram up the Prenzlauer Allee in East Berlin a few days later.

I’ve been to Berlin countless times since and the footfall and imaginings of that trip have stayed with me ever since.

Most extraordinary was the visceral sense that though almost everything (except the Wall itself) looked the same as it had done just a few weeks earlier, in fact, nothing would ever be the same again.

Whatever my political sympathies then and now, the fall of the Wall was an inspirational, necessary and ultimately unstoppable moment.

And it was a great stroke of luck and a privilege to be there at that time.

Ten years later I was there again, on one of my many visits, for the tenth anniversary celebrations.

The political giants of the ’89 era in Europe, Kohl, Gorbachev, Bush senior and Thatcher herself were all there as thousands crammed into the streets in the shadow of the Brandenberg Gate, one of the most potent symbols of a divided and but now reunited Berlin.

The razzmatazz on that night in 1999 was something to behold. But it didn’t feel quite enough and I went in search of something more nuanced and authentic.

I found it at a much smaller more ad hoc event at Bornholmer Strasse. This was the street where ten years earlier an elderly couple had almost accidentally been allowed to cross the border early on the evening of 9th November 1989.

Their crossing was one of a chain of events that a few hours later resulted in the iconic scenes of the Wall being smashed that we all remember.

It had been on Bernauer Strasse, just a mile and a half away, that Ida Siekmann became the first casualty of the wall when she jumped from her third-floor apartment at no. 48 on 22nd August 1961 just after the Wall was built.

Nine more people are known to have died trying to escape in the area of the Bernauer Strasse in the ensuing 28 years.

And so on 9th November 1999, I found myself a silent observer at Bornholmer Strasse amidst a celebration of no more than a couple of hundred people. A temporary portacabin bar was serving drinks and snacks. A woman sang One Moment in Time, accompanied by a small jazz band.

All around me small groups and couples were remembering, enjoying their own private celebrations with a bottle, a dance, an embrace and a handshake. It took me right back. It was the place to be that night.

Berlin has continued, just as it had done in the days before the Wall and the war, to reinvent itself. I still imagine the Wall when I’m there and though hardly any of it remains (the subject of a lot of debate in the city) you can still trace its path.

If you haven’t been to Berlin, make sure you do. And go to Bernauer Strasse where a small but complete section of the Wall (outer and inner with the death strip in between) still stands. You won’t regret it.

NEXT
From Scotland With Love: a gift for all of us