Plagues don’t end unless we care enough to stop them — but we knew that didn’t we? 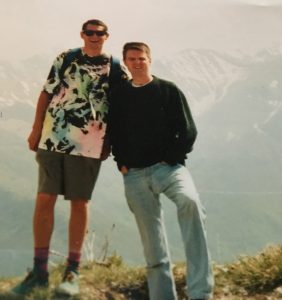 I’ve been thinking of writing again for a while. I said I might, didn’t I? I even said I’d let you know how this plague ends. But that looks hopelessly naive now. The way things are going, if I wait until then you could be hanging on a long time. And tonight, it’ll be 26 years to the day since you left us. So now seems as good a time as any to put pen to paper again.

I’ll come back to the present plague in a minute. Some other news first…

I’m writing from Scotland, the East Neuk of Fife to be more specific. And as a sat down to compose my thoughts, it occurred to me that in the decade we spent together, I don’t think we ever made it up here — to the country I came from. I think Yorkshire was as far north as we travelled — so much we never got to do and see.

So much you don’t know too. I turned 60 in March but as Judy Grahn said, you will be 37 for the rest of my life — ‘how can we understand what each other has been through?’ I guess I keep writing in the hope that you might. I’d like to think my letters reach you somehow.

My husband, Allan, and I have a cottage here, right next to the sea. I think you’d like it. James 1st, or V1th depending on your preference, said the East Neuk was a ‘fringe of gold on a beggar’s mantle.’ It’s not hard to see why — especially on a day like today when the Firth of Forth glistens in the sun. If it wasn’t for the temperature of the water, you could be forgiven for thinking we were in the Mediterranean.

Our cottage is scarcely more than the length of me from the water at high tide. Insurance is a bit of a bugger and it’s right on the coastal path so it’s kind of busy. But as so many folk remark when they stroll past, ‘that’s a wee slice of heaven you’ve got there isn’t it?’ They aren’t wrong.

I think you’d like my husband — even now it feels strange to call him that, especially to you. But to my surprise, I kind of like it. We eschewed marriage back then, didn’t we? Remember those plastic handcuffs we bought on the way to Julia and Mark’s wedding party in ’87. It seems a bit petty now, but we were just having a friendly jibe — if we couldn’t do it, why should they?

But yes, I think you’d approve of Allan. In so many ways he couldn’t be more different to you. And yet sometimes I can hear you when he speaks, especially when he gets exasperated with me (which happens quite a lot). You’ll be pleased, but perhaps not surprised to know, he’s kept me on that self-improvement course you set me on back in ’85. A man after your own heart really.

Anyway, back to this plague. Like you and Allan, Covid-19 and HIV sometimes feel like a world apart. Yet I’ve been scrambling over the resonances pretty much since the beginning. And sad to say, the comparisons don’t scrub up well. In so many ways, we’ve failed to heed the lessons of HIV in the face of it all. I’ve been a bit of a broken record — some might say a bore.

But this isn’t the first plague in living memory — and the one we went through isn’t even over yet. According to UNAIDS, there were 37.6 million people living with HIV across the globe in 2020–1.5 million people became newly infected with HIV and 690,000 died from AIDS-related illnesses.

That’s despite the fact we’ve had anti-retroviral therapy which can keep people with HIV alive since the year after you left us. Sometimes I wonder just how close you came to making the cut. It’s not as simple as it looks, of course. You were so ravaged by the virus it might have been too late anyway. But, you know, I can’t help thinking. The injustice of it all will never quite leave me alone.

So, if only because I don’t want you and our friends to have died in vain, I’m going to keep on keeping on. It’s not rocket science — and as I argued on World AIDS Day last year, if we can learn from the past, we can still change the future. And then in January, an extraordinary thing happened — just a coincidence I understand, but what timing. Finally, forty years after we descended into that hell, they told our story on popular television.

It was all thanks to a guy called Russell T Davies — he was still doing Play School when you were around. He wrote this series for Channel 4 called It’s a Sin. Echoes of the Pet Shop Boys — they came up with many a soundtrack for us, didn’t they? I can’t forget that night you stormed off leaving me with Neil, Chris and Dusty’s What have I done to deserve this? blaring out into the street.

You were right though — in so many ways. Allan’s a bit like that too — annoying but true. We did It’s a Sin together, he and I. By God it was a hard watch. Nothing can ever heal the pain. But as I wrote afterwards, it felt like a bit of redress at last. And on the back of it, I told our own story to a red top — we made the centre pages of the Sunday Mail no less. I hope you don’t mind — I just thought people should know what it was really like.

You really are quite famous now. I found myself talking about you on the Radio last Sunday too. I was reviewing a new film, Supernova, about a middle-aged gay couple — hard to imagine, eh? We had to do your dotage so early thanks to the bloody virus. Anyway, one of them had dementia. And, of course, in a heartbeat, it took me back to your journey — away with the fairies. I still hope they were kind.

I need to go now. But before I do, I have to mention this plague again. Because it turns out I was right. Just like ours, this one does discriminate. Predictably, it’s raging through parts of the developing world — and, scandalously, pretty much everywhere, its effects are distressingly unequal. As my friend Damian Barr said, ‘We are in the same storm, but not in the same boat.’

Worse still, despite what I said in my last letter about our leaders working day and night to get us through this, some of them seem determined to make a complete hash of it. Reckless would be an understatement. Astonishingly, even though we got vaccines at breath-taking speed, they want to do away with the protections we’ve been taking before we’ve ensured everyone is safe. (By the way, there might be one for HIV on the horizon at last — that took its time, didn’t it?)

Down in England, the 19th of July is set to be ‘Freedom Day’ — I can’t begin to describe just how absurd it is. And it pains me to say it given it’ll be the anniversary of your funeral, but I fear it could herald a whole lot more of the same unless people see sense fast. I suppose the easiest way to explain it is — bear with me — by comparing masks to condoms.

We’ve been wearing masks in public places like shops because it’s a way of protecting other people. No one really likes it. But it saves lives, so it’s really not a big deal. However, from ‘Freedom Day’ it’s going to be discretionary. Can you imagine if we’d decided condoms should be discretionary back then? We were already being accused of swimming in a cesspit of our own making, even though we were the ones taking the virus on. All hell would have broken loose.

I won’t labour the point — even though you’ve not been around, I’m sure you’ll get it. And that’s what makes the current predicament so breathtakingly awful. It’s really not difficult. But just as it was back then, it’s hard not to conclude that some people just don’t care — especially about people less fortunate or more at risk of infection than themselves.

Horribly familiar, I know. But I’m not telling you anything you didn’t know already, am I? Plagues — and vulnerability to them — are man-made. And they don’t stand a chance of ending if we don’t do everything in our power to stop them in their tracks. But, of course, to your cost, you know that too. We both do.