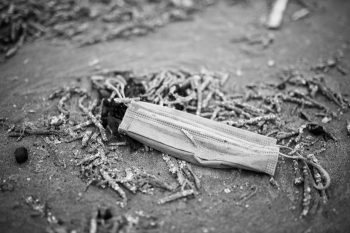 “I’ve asked so many people if they know anyone who has had Covid. Hardly anyone. Two people knew someone (not close) who’d died. Without daily news would we even know there was an epidemic?”

I don’t know which world Allison Pearson inhabits. I’m sure, once upon a time, it collided with mine as the viewer of a late-night chat show about art and poetry. Nice stuff. I’m not usually given to calling out individuals, either. Nor piling on. Nor responding to clickbait on Twitter or anywhere else.

But I live in this world. A world where this year, 60,000 people, 1 in every 1000 people in the UK, have died after testing positive for COVID-19. That’s rapidly approaching the number of civilians who died in WW2 — so often erroneously evoked in recent times.

And right now — up close and personal — my world is a shitstorm. In it, there is untold daily suffering. So much suffering, a few hundred words on Medium doesn’t even touch the sides. A real epidemic, a real virus — and real loss.

As I write this, a close friend just the other side of the city has COVID-19. He is isolated at home with his partner, whose father just died at the hands of COVID-19. His partner’s mother is in hospital. She too has COVID-19. There is even more to their story which would make you weep. But I will spare you — and them.

Of all the people I know, they could not have taken more care to avoid the virus these past few months. Early adopters of the most stringent rules — before they were even enforced. Scrupulously calculating and mitigating risk — for their own safety and that of others.

Now their whole world has succumbed to COVID-19. And in their hour of need, I cannot even visit them. Emotional and practical support must be provided through WhatsApp and by doorstep deliveries.

Their experience is the tip of a COVID-19 iceberg floating around my world. In the last month alone, I have spoken to close friends who have lost parents and siblings — in one case two brothers, and in another, a brother and both parents.

Some, but not all, of those who have died have been lost to COVID-19. But each of their deaths has been touched by the virus. The heavy lifting around their care weighing even more. The marking of their departures stunted by social distancing. The grief of those they have left behind distorted by aloneness.

All these experiences are framed — directly and indirectly — by COVID-19. The statistics tell a chilling story. But the reality is that we are living and dying in the shadow of an epidemic. Every death in 2020 will be remembered as a COVID death.

There is more. My sister who works on the frontline of social care with older people — despite being immunocompromised — has had COVID-19.

My husband, whose work involves providing daily care and support to people with learning disabilities, is also immunocompromised. But he gets on with his job uncomplainingly.

Thus far — thankfully — he has dodged the COVID-19 bullet. But the stories of those he works with would break even the coldest hearts. Their lives have been upended in the cruellest ways by the virus. Changed utterly, permanently.

And then there are those close friends who are shielding partners with cancer, those who are trying to navigate the world of elderly care homes. Those who are contending with both those things — day in and day out. People who are usually resilient and capable — now anxious in the present, and terrified of the future.

Consider this too. The circles I move in are not rich, but they are – for the most part – reasonably comfortable and middle class. The people I know have a permanent roof over their heads, they can pay their bills, feed their kids, and support their parents.

But I know from my work that for every one of them there are others, countless others, who are contending with everything I have described — and poverty.

This is the world I live in — the world I know. I don’t need daily news to know there is an epidemic. I just have to wake up in the mornings. That’s just as well because although I’m a news junkie, increasingly I can’t bear to tune in. Especially in the mornings.

I have commented throughout this pandemic that for those of us who lived through the AIDS crisis in the 1980s and 1990s, the sense of déjà vu is relentless. We have tripped over the resonances. And one of them goes like this.

We live in a free country. I don’t want to deny people the right to speak their minds— still less to ‘cancel’ them, to use the current jargon. They are entitled to their ignorant, narcissistic, contrarian philosophies. And I can close my ears and look away.

And I wish those who pay them, those who cheerlead for them, those who feed off them, would consider — just for a moment — the impact of the nonsense they spout. The crass insensitivity. The falsification. The wanton irresponsibility.

You’ll have gathered I’m angry. I’m probably, to use some more of the current jargon, ‘virtue signalling.’ I don’t care. People in my world are hurting. I don’t have to ask them. They tell me. And there are more than two of them.

PREVIOUSNEXT
When plagues meet: if we can learn from the past we can change the futurePlagues don’t end unless we care enough to stop them — but we knew that didn’t we?